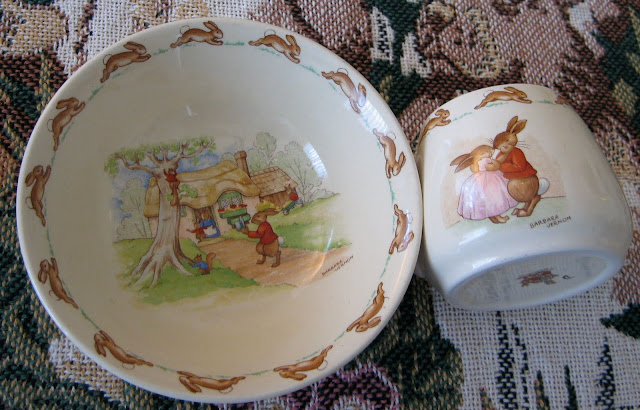 This adorable vintage Royal Doulton "Bunnykins" baby bowl and cup, both signed by Barbara Vernon, is perfect for my display of bunnies this week.  This mismatched set was passed down from my in-laws.  After some research on the internet I discovered the bowl, "Visiting the Cottage," is a different subject than the cup.  The cup, "The Proposal"  above shows Mr. Bunnykins kissing his fiancee after his proposal.
Royal Doulton Bunnykins
From Wikipedia, the free encyclopedia
Royal Doulton Bunnykins Chinaware and Figurines are popular ceramic designs manufactured as nursery dishes and collectible statuettes.
The chinaware line originated with artwork by Barbara Vernon Bailey, the daughter of Cuthbert Bailey, general manager of Doulton during the 1930s. Unbeknownst to the public, Vernon was not a professional illustrator, but a nun in the Augustinian Canonesses of the Lateran.[1]
Introduced in 1934, Bunnykins tableware depicted Mr. and Mrs. Bunnykins and other rabbits dressed in human clothing, in colourful rural and small-town English scenes, transfer-printed on white china. The earliest pieces, signed by Vernon, are quite rare and highly prized. Bunnykins china was used by Princess Elizabeth and Princess Margaret and thus became a popular present given as christening and birthday gifts in middle-class English homes.
Figurines by Charles Noke featuring various Bunnykins characters began in 1939. The first line consisted of only six designs. All factories were closed for the duration of World War II, bringing production to a halt, and thus these six figurines have also become very rare. Following the war, production of Bunnykins figurines did not restart until Royal Doulton purchased the Beswick factory in 1969. After this, Bunnykins were numbered with the prefix DB and are still produced to this day.
The Bunnykins figurine line is famous for the large number of professions, historical and literary figures, and traditional costumes interpreted as rabbits. Named figurines include Policeman Bunnykins, Nurse Bunnykins, Sir Lancelot Bunnkykins, Betsy Ross Bunnykins, Lapplander Bunnykins, Fortune Teller Bunnykins, and more. In 2005 a Bunnykins figurine honoring Barbara Vernon was produced. Titled "Sister Barbara," it depicts a cloistered nun at her drawing table, presumably painting the original Bunnykins design 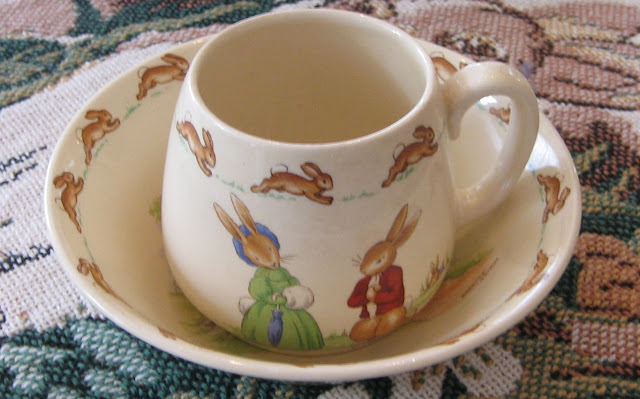 I love the bunnies hopping around the top of the bowl and cup.  Here is the scene on the other side of the cup, "The Proposal," showing Mr. Bunnykins on his knees proposing. 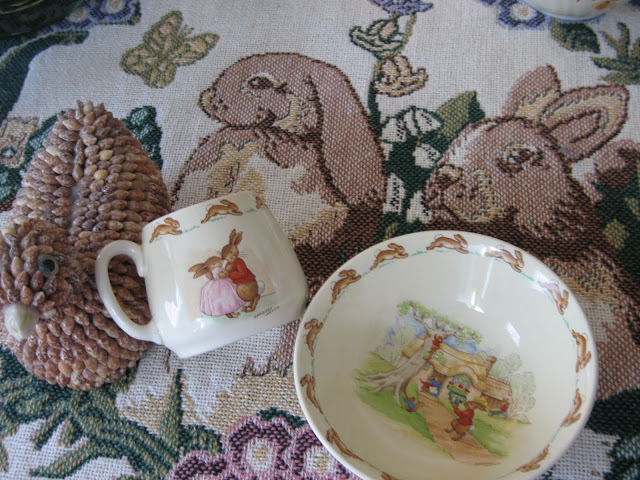 And what better tablecloth than another bunny throw! 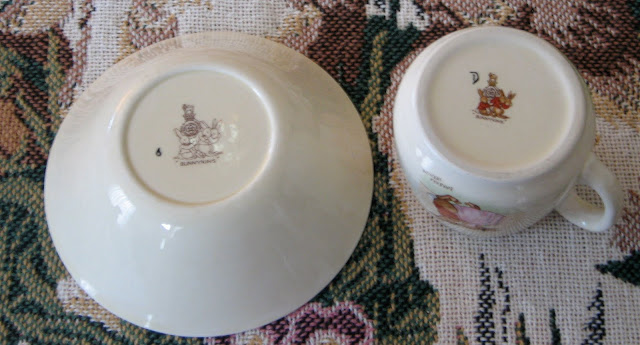 I found this website regarding Royal Doulton logos and backstamps (here).  It shows "Bunnykins" backstamp for the bowl is c1934 - 1937.  The backstamp for the cup with the lion coloured brown is c1937-1953.
Believe it or not I still have some bunnies hopping around my home to show you. 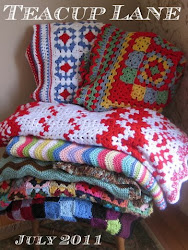 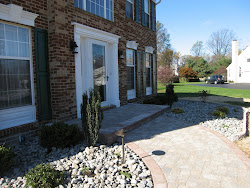 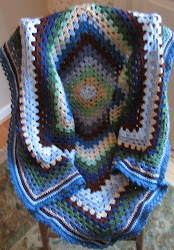 Made for Lucas, our Grand-nephew 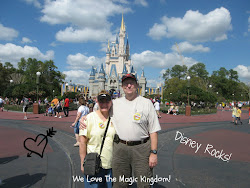 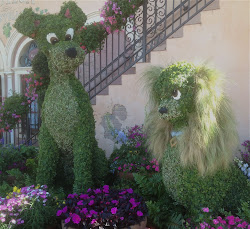 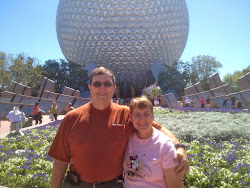 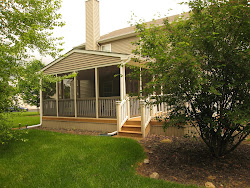 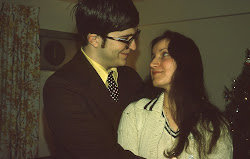